We’ve caught spring fever, and come up with our best sale yet on signed copies of all six books - including Ray Keating's new thriller, WINE INTO WATER: A PASTOR STEPHEN GRANT NOVEL. Yes, spring is the ideal time to read about a Lutheran pastor who once served as a Navy SEAL and a CIA operative. These are exciting and thoughtful thrillers and mysteries. 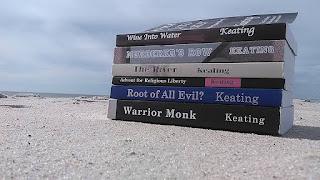 According to reviewers, there are plenty of reasons to enjoy the PASTOR STEPHEN GRANT NOVELS. Consider just the following 10 points…

1. Reviewers love WINE INTO WATER. Kirkus Reviews says, “A first-rate mystery makes this a series standout.” Self-Publishing Review adds, “Part thriller and part mystery, Wine into Water is full of action, suspense and an electric cast of characters - both villainous and heroic - that will satisfy fans of crime thrillers.” And Aleteia.org declares, “In this adventure, sixth in the series, wine counterfeiters (no, I haven't heard of that either) infest the vineyards. When Grant's around, nobody messes with the communion wine.”

4. Kirkus Reviews also gives a big thumbs up to THE RIVER: “A gritty, action-stuffed, well-considered thriller with a gun-toting clergyman.”

6. From a Washington Times review of THE RIVER written by a pastor and former CIA officer: “What Ian Fleming's 007 series has probably done for ex-MI-6 agents and Tom Clancy has done for retired CIA officers, Mr. Keating has done for the minority of former CIA agents who have served their country by working in the intelligence community, but now wish to serve God.”

8. A Touchstone magazine review of MURDERER’S ROW says: “This is a fun read, though the embedded theology is real and salutary. There is death and life, adultery and commitment, friendship and betrayal, violence and victory over violence… Perhaps the best part of the book for the reviewer is that the clergy are good at helping people bring Christ into their vocations.”

Spring is the season for reading. So, order signed copies today – for your own enjoyment and for gifts – at www.raykeatingonline.com.