Stephen Grant, pastor at St. Mary’s Lutheran Church on Long Island, former Navy SEAL and onetime CIA operative, came on the thriller/mystery scene in Warrior Monk: A Pastor Stephen Grant Novel. This book by award-winning novelist Ray Keating has received accolades from reviewers and readers, and now the second edition has arrived with a new Author Introduction and Epilogue. 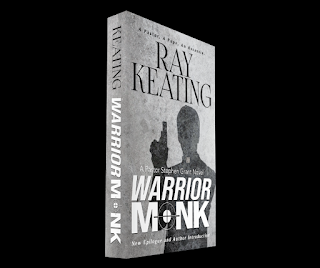 In the new Introduction, Keating answers an assortment of questions about the book and writing, while the new Epilogue provides a glimpse at an upcoming Pastor Stephen Grant novel.

Paperbacks and Kindle editions of Warrior Monk: A Pastor Stephen Grant Novel are available at Amazon.com, and signed books at RayKeatingOnline.com.

In addition, a new edition of A Discussion Guide to Ray Keating’s Warrior Monk has been published, which also is available at Amazon.com and signed books at RayKeatingOnline.com.